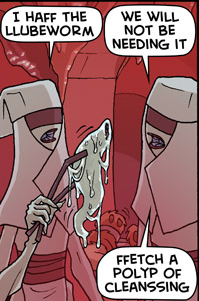 (Picture is from the Webcomic "Oglaf" which is usually not suitable for work.)

These are tall, slim, pale humaniods. They typically move laconically, but are capable of smooth, lithe motion and their long limbs let them travel faster than you would expect. They are strong, but fragile. You do not want to be hit by one, but if you get in the first blow, they will likely suffer from broken bones.

Perhaps because of this, they are excellent physickers, using elaborate and disgusting magical ingredients to support their strange healing powers.

There are rumors that Elvin god-mages created these people to aid them in experiments in Blood Magic. Certainly some Meeddrick are blood mages.

They seem no smarter than normal people, but most have a low sense of humour so it is easy to underestimate them.

During the exploration of the temple of the mad god, stone carvings showed Meeddrick under elf direction removing organs from victims and replacing them with something else, new organ like things with tendrils. This apparently allowed the victims to continue to live despite organ removal and spread disease in their villages.